Why Western Sanctions Will Fail 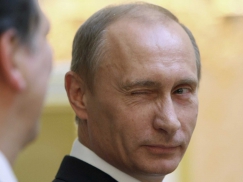 Ben Aris, Editor-in-Chief of the Business New Europe, outlines today's situation with Western sanctions on Russia and clarifies their likely outcome to the West, Russia, and other key players.

With the violence in eastern Ukraine escalating by the day, the West's policy of imposing sanctions on Russia is bound to fail. All this policy has done is to paint both the Kremlin and Washington into their respective corners, making the chances of military confrontation look increasingly likely.

As the German foreign minister, Frank-Walter Steinmeier, warned in interviews published in four European newspapers on May 6, "The bloody pictures from Odessa have shown us that we are just a few steps away from a military confrontation."

Thus the time for both Washington and Moscow to cut their losses and agree to meet to thrash out a compromise is now. Each day that passes will see the body count rise and drive the proxies that are actually doing the fighting at the behest of the two Great Game players become more and more invested in the violent cycle of anger and revenge, so that if the overlords try to pull the plug they might find it is too late. Indeed, this point may already have passed with the death of over 40 pro-Russian activists in Odessa.

German Chancellor Angela Merkel and US President Barack Obama warned Russia the West would scale up to phase III sanctions, those that target sectors like banking and energy, if Russia interferes in any way with the upcoming Ukrainian presidential poll, slated for May 25. But with the situation in eastern Ukraine clearly spinning out of control, it will be impossible to hold what the international community considers to be a "free and fair election".

Having drawn a line in the sand, the West will be forced to take the nuclear option of doing real economic damage to the Russian economy and so force the Russians to retaliate in kind. We will be lucky if both sides hold themselves to just attacking on the economic front and not the military one as well.

The irony is the Germans have tied themselves to a policy that they clearly don't want, or can ill afford. Of all the European countries, Germany's economy is the most closely bound to Russia. Germany depends heavily on Russian oil and gas, which accounts for the bulk of the €40bn it imported from the country in 2012. In the other direction, German exports to Russia totalled €38bn in 2012, which was 31% of all European exports to Russia. Therefore, doing real and significant damage to the Russian economy will do similar damage to Germany's nascent economic recovery.

The idea that sanctions, especially the pathetically weak ones that have been imposed so far, will have any impact on the Kremlin's "calculus" is to totally misjudge the situation. "The whole idea that we are going to defeat the Russians by imposing hardship on them boggles my mind," says Clifford Gaddy, a Russia expert at the Brookings Institution and the author of the "virtual economy" meme that dominated the 1990s discussion of Russia's problems. "It's not a matter of how much pain you can impose, but how much they can tolerate. And how much can they tolerate depends on the motivation for their behaviour. For Russia it is a question of national interest and survival. It is not just about greed."

Gaddy's voice is one of a growing chorus questioning the wisdom of the sanctions policy. Europe is clearly split on the issue, but the US holds the trump card: if Washington imposes financial sanctions on a major Russian firm, due to the integration of the global financial system these sanctions will effectively lock the Russian company out of the international capital and banking markets.

"What is less clear, however, is what these sanctions will actually achieve," says Dmitri Trenin, the highly respected director of the Carnegie Moscow Center. "Making Putin back down and concede defeat in Ukraine is improbable. Driving wedges between the Russian leader and his close associates is equally hopeless. The Russian liberal opposition, already marginalized, will hardly get a shot in the arm thanks to the sanctions. As to the bulk of the Russian people, their instinctive reaction to massive outside pressure against their country is more likely to be a patriotic surge rather than a regime change. The Russian government will now have an excellent reason to explain away the coming economic hardships: US sanctions."

In reality, the sanctions have so far had precisely the opposite effect to what was intended. Designed to undermine Putin's support, they have actually lifted the president's approval rating to an all-time high of 82%  – exactly at the time when his popularity was becoming vulnerable due to the woeful state of Russia's economy – while the popularity of Obama is now at a record low of 42%. Likewise, his inner circle, which has been hardest hit by the current "sanctions-lite", has closed ranks and mocked their effectiveness.

The boost in Putin's popularity has also handed him shiny new armour against the slings and arrows of Russia's young opposition movement, at one of the very few junctures where it actually had a chance of finding a flaw in the president's defences. Domestically, the Ukrainian crisis has killed the nascent opposition dead for the time being. At the same time, other polls show that public approval of the government actions is rising and Russians now regard the country as being on "the right path."

Finally, Putin is clearly digging in his heels and the transparent divisions in European support for the US line on tougher sanctions is child's play to exploit. Not only was Putin not prepared to back down in the face of western threats, now he is reaping huge domestic political capital from his tough-talking defiance – exactly the capital he needs to weather the disapproval that was bound to follow the first fall in the standard of living in Russia since he took over 2000.

The West will truly have to destroy the Russian economy before they can persuade the people that Putin is the wrong man for the job. And that nuclear blitz option would do just as much damage to the European recovery. 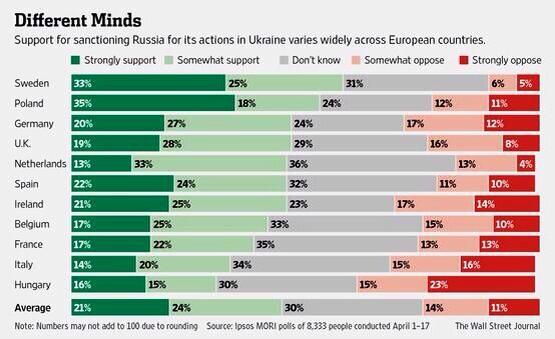 Indeed the only country that is truly committed to imposing tougher sanctions on Russia is the US, which has virtually no economic interests in the country; those American companies there are in Russia are for the most part multinationals, which are notorious for their lack of interest in politics. "There is palpable resistance on the part of various Western business interests — from German manufacturers to US big oil — against ratcheting up sanctions. The Obama administration's effort to talk Russia down is countered by the Kremlin's outreach to the CEOs of the companies that are doing well in Russia," Trenin concludes.

“We are against imposing unilateral sanctions on Russia. They are not a way out,” Chinese Ambassador Li Hui said the day after Washington released a new sanctions list singling out Putin's friends and other officials on April 28.

If Washington's policy is one of containment, then facilitating a closer alliance between Moscow and Beijing is clearly counter productive. If Russia is cut off from the west, the only place Moscow can go is into the open arms of the and commodity-hungry east. China is already siding with Russia and said on May 5 that it would help finance and build a bridge over Kerch Strait to permanently link the recently annexed Crimean peninsula to Russia.

Boris Titov, Russia's business ombudsman and head of the Sino-Russia business council for the last decade, has said exports of liquefied natural gas (LNG), ecologically clean food, timber and wine to China will more than compensate for any losses Russia incurs if relations with the EU worsen.

Why is the US following such an obviously flawed strategy? Anatol Lieven, the director of Research on Terrorism and International Relations at King’s College in London, offered an explanation in an interesting paper for the Valdai Club on May 5.

Lieven argues that US foreign policy is still driven by the so-called "Wolfowitz Doctrine,” drawn up by the former deputy defense secretary Paul Wolfowitz in a paper for the Defense Planning Guidance of 1992.

At the time this paper came under so much attack that its proposals were drastically scaled back in the final version, but in the meantime its proposals have largely been adopted as the core of US foreign policy: "that the United States should commit itself to preventing any other country from dominating any region of the world that might be a springboard to threaten unipolar and exclusive US global dominance," Lieven summarizes.

No one takes Africa seriously yet. The US has failed to make much progress in swaying the regimes of Latin America. China it can't touch, as US companies are too heavily invested there. And the Arab Spring too appears to be out of US hands. But in Russia's case – the traditional foe – the US' lack of commercial or strategic interests leaves it unfettered to take as hard a line as it likes.

"The rise of China means that Washington is facing the first economically equal peer competitor since the United States overtook Britain some 130 years ago," writes Lieven. "Yet in Ukraine, Victoria Nuland — the leading US diplomat in the region, who egged on the Kyiv protestors to bring down the pro-Russian Ukrainian government in February — and her US colleagues have been partying geopolitically like it was 1992."

Lieven concludes: "By driving Russia towards China, US policy does much to ameliorate China’s two greatest strategic weaknesses: its lack of major allies, and its dependence on long and indefensible maritime energy routes."