The Russian Market as a Driver for German Shipbuilding 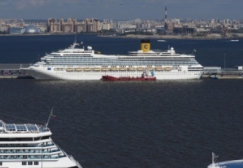 In the last few years, German shipbuilding industry, a key export sector in the country, declined by over 90 percent being under competitive pressure of Asian shipbuilders.

Between 2008 and 2010, the German shipbuilding industry experienced its deepest crisis of the post-war period. According to the German Shipbuilding and Ocean Industries Association (VSM), new ship orders declined by more than 90 percent between 2007 and 2009 and many unspecialized German shipyards were driven out of the market, unable to face the competitive pressure coming from Asian shipbuilders.

Shipbuilding back on the rise

Only recently have ship orders picked up once more, mainly through ocean-going vessels of which 97 percent are exported. A recent study commissioned by VSM and the five German states of Bremen, Hamburg, Lower Saxony, Mecklenburg-Western Pomerania and Schleswig-Holstein now show that in such an export-dependent situation the prospects offered by the fast-growing Russian market could provide the critical growth engine and “long term planning security” German producers so desperately need.

What shipbuilding means for the Russian economy

The Russian economy relies heavily on ship transportation which represents a significant share of its internal logistics. More than 60 percent of Russia’s international trade is done through maritime transportation. The need for new ships is enormous: in 2009 the Russian market registered around 1400 new ships, a trend which is expected to be maintained until at least 2020. Significant demand exists in very different sectors from industrial fishing, commercial cargo to the transport of oil and natural gas or the technologically advanced exploration of the Arctic Ocean, a sector where the German suppliers have a comparative advantage. “Russia is a very interesting market for us,” Reinhard Lüken, General Managing Director at VSM, told the German Press Agency (dpa).

According to the German Federal Ministry of Economics and Technology, in 2011 Russia imported ships and maritime technologies worth €1.9 billon. Roderick Keay, General Director of NEVA, the Russian International Shipbuilding exhibition, which took place in St Petersburg from 24-27 September 2013, explains that there is an “urgently required renewal in the shipbuilding, shipyards and ship equipment industries, the sea and inland waterway shipping fleets, the marine support sector for the offshore energy expansion and for the port systems throughout the Russian Federation.

International partners are welcome on the market and benefit from the Russian government’s support. Deputy Prime Minister Igor Shuvalov recently said, “Our partners expect to benefit from easier access to the Russian market, and a more stable and predictable business climate.” In 2011, NEVA attracted more than 1,200 participants from over 50 countries and 17,000 visitors. According to Mr. Keay, an even larger audience is expected in 2013.

German producers seem to enjoy a good reputation in the eyes of their Russian customers. “If the German shipyards could deliver 100 ships, and help the Russians to fulfill the majority of their internal demand by themselves, then it is clearly a win-win situation for both sides,” Mr. Lüken argues. Recognizing these market opportunities, the German government also supports incentives such as a business delegation to St Petersburg and the Leningrad region organized by COMMIT GmbH, a member of the German-Russian forum, on 22-27 September 2013. One of the delegation’s major highlights: the Shipbuilding Exhibition NEVA.