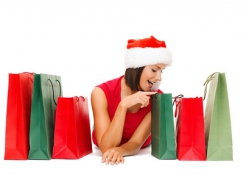 Average Russian consumer spends more than any other average European.  Moreover, Russians will spend 13% more in holiday season this year than a year ago.

Despite the economic slowdown, Russian consumers intent on enjoying their New Year's holiday plan to spend 13 percent more than in 2012, a survey by Deloitte CIS found.

The respondents reported an average holiday budget of 19,200 rubles ($580) with about 8,600 rubles allotted for gifts, 7,500 rubles for food and 3,100 rubles for entertainment, Deloitte said in a press release Wednesday.

The average Russian consumer intends to spend 17 percent of their gift budget on themselves, more than in any other European country.

Otherwise Russians are steadily approaching the consumer behavior of Europeans, who tend to favor planned purchases and functional gifts.

One-third of respondents said that they would focus on buying useful presents this year and about 30 percent reported plans to decrease spontaneous purchases, the survey found.

This trend reflects the economic slowdown and low expectations for 2014, said Vladimir Biryukov, a partner at Deloitte.

The proportion of their budget that consumers plan to spend on presents for children has declined steadily in recent years, from 43 percent in 2010 to about a third this year.

The most popular gift was cosmetics, with 37 percent of respondents planning to give beauty products as gifts during the holidays.

Thirty-two percent planned to give chocolates, 20 percent books and 17 percent will be handing out cash or gift cards.

As for the gifts Russians hope to receive, about half of those surveyed simply want cash.

Men are hoping for electronics: 46 percent of them want a smartphone and 35 percent a tablet PC.

The interviews were taken in September and included 750 participants from six Russian cities with populations of over one million. No margin of error for the survey was provided.