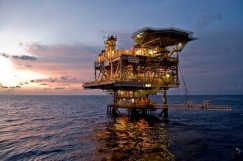 The Russian domestic industry is unable to meet demand for equipment in all shelf projects. Besides, if the technology is not reliable, customers will face delays and possibly accidents on some developments.

Buy Russian! Gazprom and Rosneft urged to use domestic equipment

The Russian government is considering making Gazprom and Rosneft purchase up to 80 percent of the capital equipment needed for shelf oil field development domestically.

The rules on equipment purchases may work two ways, says Russia’s Union of Producers of Oil and Gas Equipment (UPOGE). It could be fixed at between 30 to 80 per cent across the board, or Rosneft and Gazprom could each have specific targets depending on the project and type of work.

Alexander Romanikhin, UPOGE President, told Izvestia newspaper that amendments to legislation will be presented before the end of this year.

According to Romanikhin, buying equipment from abroad and putting money into a foreign economy makes little sense.

“As oil and gas engineering are strategic industries for our country, not using Russian equipment will make us dependent on technology from foreign producers. It’s like buying tanks from the US. We sponsor their economy while the Russian oil and gas industry perishes from lack of orders”, compared Romanikhin.

Oil companies welcomed the introduction of a Russian equipment directive; however, they suggest introducing it gradually. Radif Tuktarov, the head of department of oilfield services purchases at Gazprom Neft says a 10 year period to introduce the changes would be preferable.

“If in 2015 this directive covers 5% of the general equipment and services, by 2030 it will grow up to 90%, without reducing the quality and extending the time for sea field development”, Tuktarov said.

However Stanislav Kemishis, the head of the scientific and technical area of Rosneft’s production division believes that setting such strict requirements is too early. The domestic industry is still not able to meet the necessary demand for equipment in all shelf projects. Also, if the technology is not reliable customers will face delays and possibly accidents on some developments.

“Primarily it’s important to make a list of all the shelf’s contractors in order to understand the scale of work they’ll be ready to perform”, says Kemishis.

“Russia can't be turned into the prototype for experimental equipment approval, as any failures can lead to multi-billion dollar losses and even accidents”, said Alexander Karasevich, from SGM, a company which builds pipelines for Gazprom.