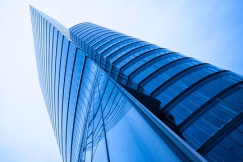 Developed cities in Russia's regions are suffering from a lack of high-quality office space, according to a Jones Lang LaSalle report published Monday.

There is a shortage of modern high quality office buildings in Ufa, Chelyabinsk, Omsk and Kazan, as well as other economically developed cities where the population has reached 1 million, the report said.

In line with the demand, the volume of quality office space construction in the regions could increase by more than 20 percent by the end of 2014 and reach 3 million square meters. The most rapidly growing regional market is Yekaterinburg, accounting for a quarter of planned new construction.

At the same time, compared to the volume of office space construction in the capital, regional demand is much lower, he said. The majority of tenants prefer to lease offices 10 times smaller than those in Moscow.

Business centers of Class B+ and B- by Moscow standards will be in demand in regional markets, according to the report.

Because the amount of vacant office space is limited, construction of new business centers in the regions is seen as potentially profitable for developers, although real estate experts warn that the location for them should be chosen wisely.