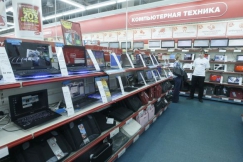 After 20 years on the Russian market, M.video is contemplating expansion into Belarus, Kazakhstan and Ukraine.

Alexander Tynkovan, the founder, main shareholder and chief executive of M.video, is confident that consumer spending is strong and stable in Russia

Russian home electronics and domestic appliances retailer M.video is confident that consumers will continue to spend rather than save, despite a sharp economic slowdown.

Across Europe, retailers are struggling as government efforts to bring down national debts reduces disposable income. Electrical store groups have been particularly exposed because they sell goods that are not essential.

Alexander Tynkovan, the founder, main shareholder and chief executive of M.video, said he was not budgeting for any sharp decline in Russia's consumption.

"We have no habit of saving in this generation and, deep down, people have nowhere to invest," he said. "Buying property or a car is too costly, and we have very few ways of entertaining ourselves, especially in the provinces."

Buying a new fridge or a washing machine is still an event for an average family, Tynkovan said, and consumers keep flocking to electrical goods stores even when a crisis bites.

There was no expectation of rapid growth like that during the early 2000s, nor did he foresee a drop.

"If there is a recession and people lack money, they will, of course, eat first and then buy anything else, but we do not expect people only to have money to eat and not a kopeck more."

The slowdown means some Russians will struggle to pay debts they have piled up, but Tynkovan does not expect a pinch as M.video targets middle-class and higher-income shoppers.

Growth is expected to slow to below 2 percent this year, but consumer spending has held up.

M.video opened its first store in 1993 on central Moscow's Maroseika street, giving the name 'M' to the network that now counts more than 300 outlets in 140 Russian cities.

Having expanded into bigger cities with spacious stores, the company is now opening smaller outlets after combining its stores and Internet business.

Tynkovan shrugged off the competitive threat from a growing number of online firms that often struggle to provide the service levels demanded by customers and fail to make profits.

"We have strong doubts about the pure online model," he said. "In a 5- to 10-year perspective, I see two prevailing models: our 'omni-channel' and Amazon's."

The world's largest Internet retailer, Amazon, has yet to make a foray into Russia, but Tynkovan said poor infrastructure and a consumer preference for paying with cash rather than plastic would be a constraint to expansion.

"In Russia, we do everything that Amazon does. Our main specialization is competent stock management," he said. "And we are good at predicting our sales."

He said M.video was in talks with PayPal, the online payment service owned by eBay, which had recently started operations in Russian rubles, to accept customer payments.

Fast growth of Internet use in Russia in recent years has spawned hundreds of e-commerce startups, which are accused of using "gray schemes" to deliver products.

That market has been stable, but Tynkovan said it might surge if the government lifts a ban on parallel imports: goods intended by their manufacturer for use in one country but imported and resold in another.

This could deter foreign electronics manufacturers from investing in local production — a goal pursued by the government to diversify the country's resource-based economy, he said.

Tynkovan said M.video aimed to open 30 to 35 new stores a year in 2014-16, compared to 40 openings in 2013, increasing the density of stores rather than expanding into new regions.

Opening its own stores rather than acquiring existing ones remains a priority for M.video after it decided against a merger with competitor Eldorado, owned by Czech magnate Petr Kellner's investment group PPF.

"We've started to open [smaller] stores, and thanks to the Internet we can decrease the stock in the stores, this is why physical [space] is losing its appeal for us," said Tynkovan, who is eyeing expansion into Belarus, Kazakhstan and Ukraine.