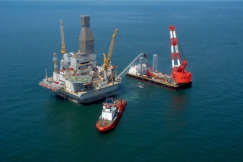 …From January 2014, this new Russian law allows state-controlled Gazprom and Rosneft to take on foreign companies to help extract reserves from under the seafloor and provides a partnership model that may prove lucrative for the foreigners.

A law just out of the Kremlin is raising the specter of a new era in the development of the country's offshore oil and gas riches by streamlining the involvement of foreigners.

Taking effect in January, the law allows state-controlled behemoths Gazprom and Rosneft to take on foreign companies to help extract reserves from under the seafloor and provides a partnership model that may prove lucrative for the foreigners.

"There was nothing like this before," said Andrei Grachev, a senior lawyer at consultants KPMG in Russia. "It is the best possible setup for extracting hydrocarbons offshore."

Gazprom and Rosneft have amassed a stupefying number of licenses to explore for the resources in Russia's offshore zones, an area that the government appears to have reserved exclusively for the pair. But both have so far made little headway because drilling requires not only deep pockets, which they have, but also cutting-edge technology, which prompted them to look to the West.

So far, the obstacles to Western companies' involvement have been enough to stunt cooperation. Gazprom is preparing to start production at two offshore fields on its own by the end of this year, including the one targeted by Greenpeace activists last month. The gas monopoly's partnership with France's Total and Norway's Statoil to produce oil from the vast Shtokman field in the Arctic has not flown for reasons that included high investment requirements and a glut on the market of natural gas. Rosneft has teamed up on a number of fields with three foreign heavyweights — ExxonMobil, Statoil and Eni — in an arrangement assuring the Russian company control of the joint ventures, and some exploration has taken place.

The government has now put in place an easier, off-the-rack model to tap foreign expertise, Grachev said, enshrining the basic terms in a law rather than relying on companies to hammer out each deal. Signed by President Vladimir Putin on Sept. 30, the law says that a license holder can hire an operator, either a Russian or foreign company, for a field, and the operator can then bring in contractors.

That a foreign firm may be an operator follows from several provisions of the law, which is a slate of amendments to other laws. One such amendment, to the law on the country's sea shelf, is a statute that grants the right to work in the territory to "Russian and foreign legal entities, which have been contracted" by license holders for the "construction, operation and use of artificial islands, rigs and facilities."

The law entitles operators to alluring remuneration, Grachev said. Their payment will depend on the amount of oil and gas that they produce and on receipts from the sale of the commodities, essentially granting them a proportion of the revenues.

KPMG lawyers were members of the pool of experts that evaluated the bill and made proposals to improve its language.

Rosneft spokesman Vladimir Tyulin said the company could use the law to change its current and future deals with partners.

He added that the law indicated that the government was acting on its statements about the importance of giving impetus to offshore projects.

"The country's leadership is aware that offshore resources are the future for the development of the economy and the sector. That is why laws like this are appearing, to create attractive conditions to work offshore," Tyulin said.

"The technological complexity of programs to develop offshore resources surpasses that of space exploration," Sechin said over the weekend, Interfax reported.

Gazprom did not respond immediately to a request for comment Monday evening.