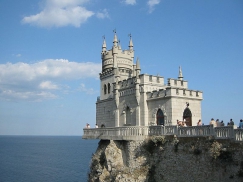 ‘The Swallow Nest’ next to Yalta, Crimea

Why are there opportunities currently in Crimea? A Chinese proverb says that crisis generates opportunity. No wonder the Chinese businesses are known for being trailblazers in many attractive investment destinations around the globe. Crimea is no exception. Almost half a year before recent events, Wang Jing, the Chinese billionaire, publicly confirmed that his companies intend to invest $10 Billion into Crimea over the coming years, starting in late 2014. Targets include construction of a new deepwater port, reconstruction of the port of Sevastopol, development of a high-tech economic zone, construction of a new airport, a new oil refinery, a liquefied natural gas (LNG) terminal, a shipyard, and a few educational and training centres.

As of today, Crimea and its political risks are easier to evaluate. Those who do know the history of Russia, and Crimea in particular, have no illusions about its future. Russia will unlikely let it go again.  Putin’s triple mantra – ie, stability, stability, and stability – will be the case with Crimea for the years to come. The Russian Federal Government’s development programmes will cover this territory, including subsidized industries/ businesses, tax and innovation incentives, infrastructure projects support, etc. Alexei Ulyukaev, Russia’s Federal Minister of Economic Development, recently noted that Crimea will become a ‘region of outrunning development’.

While under the Ukrainian jurisdiction in the last 23 years, Crimea was lacking sufficient, if any, investments. Just last week, it was announced that the Russian Government has secured over $5 Billion for Crimea with its significant part to be spent on infrastructure projects.

Moreover, Crimea’s Special Economic Zone status will shortly become law, which means preferential customs and tax regimes for businesses operating in Crimea. As is the case in the Kaliningrad Economic zone, companies operating in Crimea – foreign and domestic – will receive 6-year waiver from profit and property tax.  The first Russian private investors have already announced initial investments of over $5 billion. The federal government will form the Crimea Development Corporation to coordinate and support those investment projects.

The Crimean economy could be characterised as highly diversified with a very developed SME segment, making it easy for international companies to identify local contactors, partners, and expertise in many areas. Average income per capita is some 3-4 times lower than in mainland Russia, which makes local manpower highly competitive on the national level.

The following sectors might be of interest to investors:

1. Tourism and Hospitality. With its mild subtropical climate, more than 300 km of beaches (out of 943 km of cost line), over 3000 hotels and 750 health resorts, Crimea is traditionally considered as the “Russian Riviera”.  No wonder Russian Royal families and the Soviet elite had their summer residences here (Tsars in Livadia, Gorbachov in Foros).  In 2013, Crimea attracted over 6 million of tourists. This number is likely to significantly increase this year. However, the industry requires fundamental modernisation, expertise in contemporary management and operations, and many supporting services.

2. The agriculture sector is the second leading industry on the peninsula, with 2/3 of the territory devoted to agricultural pursuits.  There are over 1,800 thousand hectares of farmland in Crimea.  Reunion with Russia creates direct access to Russia’s over 150 million consumers, who are inclined to buy locally produced food products. As is the case with most industries on the peninsula, the agricultural projects need contemporary technologies, machinery, and specialised expertise in modern farming, packing and distribution. A number of agricultural products are Government subsidised.

3. Infrastructure. As mentioned above, the initial government funding is to be spent this year on transportation, road building and renovation, recreation, power and water supply, utilities, communications, etc. Furthermore, Crimea is to be included into the national gasification programme that might require millions of kilometres of modern gas pipes and related expertise.

5. Alternative Energy. Currently, 6% of all energy generated on the peninsula is from wind, solar, and geothermal sources. JV and other cooperative opportunities in this area have great prospects for international peers due to ever growing demand for energy supply.

6. Seaport and cargo transit facility construction, renovation, maintenance, international logistics operations and expertise. There are 4 seaports in addition to Sevastopol – Evpatoria, Kerch, Feodosia, and Yalta – that require renovation and further development.  China included Crimea in its Silk Road Economic Belt towards Europe which, when fully set up, will shorten the route of Chinese goods to the Old World by some 6,000 kilometres. According to 2013 estimates, the port in Sevastopol, upon renovation, will be generating $1.5 billion in annual sales from the transit of Chinese goods alone. Chances are that Crimea will soon emerge as a new cargo logistics hub of continental calibre.

7.  Air transportation. There are 3 airports in Crimea: Simferopol, Kerch, and Dzhankoy. Ever increasing passenger and cargo streams will likely require airport modernization and new airlines connecting the peninsula with Moscow, St Petersburg, Kiev, and major Russian cities. On March 18, President Putin requested Crimean authorities to solve the air transportation issue by June 1, 2014 in order to meet the expected demand from a flood of Russian tourists. It appears to be an immediate business opportunity for low cost airlines.

More information and infographics on today’s Crimea economic figures and prospects can be found here.