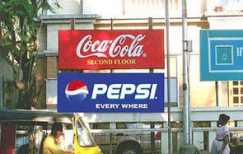 Pepsi vs Coca: Who is winning the Russian beverage market?

PepsiCo (NYSE:PEP) and The Coca-Cola Company (NYSE:KO) have established their presence in Russia’s beverage market. The country offers growth opportunities due to low per capita consumption of beverages and increasing consumer disposable incomes. In the previous article, we elaborated on the carbonated soft drinks (CSD) segment within the beverage market and how it might not benefit from this growth potential due to rising health concerns over consumption of fizzy drinks. Most of the growth in Russia’s beverage market is expected to come from other segments such as fruit/vegetable juice, sports and energy drinks, ready-to-drink (RTD) tea and bottled water.

The fruit/vegetable juice market in Russia stood at $5.1 billion in 2012. [1] PepsiCo has dominated this segment in the last few years, and has a market share of over 40% presently. This is because the company acquired local companies Lebedyansky in 2008 and Wimm-Bill-Dann in 2011, which are the top two brands in this category. [2] On the other hand, Coca-Cola has a market share of ~25%, bolstered by the acquisition of Multon and Nidan.

However, both PepsiCo and Coca-Cola have relinquished some of their lead in the juice market in the last few years. From an impressive combined market share of 82% in 2010, their shares decreased to 64% in 2012. Rising local brands and retailers’ labels that offer lower prices compared to PepsiCo and Coca-Cola have gathered more market share. For example, the Russian company Sady Pridonia now accounts for almost 10% of the market, up from 6% in 2010.

Low per capita juice consumption (~20 liters per person) and low levels of penetration in less developed cities are reasons why we expect Russia’s juice market to grow. [3] Despite being the market leader presently, PepsiCo will look to optimize operational costs and reduce its product prices in order to compete with local players on the pricing front.

Budding Segments Are Dominated By PepsiCo

In addition to the fruit/vegetable juice market, PepsiCo has a stronghold in the sports and energy drinks, RTD tea and bottled water markets. Although these categories have a small share in the overall beverage market, they offer huge growth potential. This is primarily due to growing health awareness among consumers, which has targeted the consumption of fizzy drinks. In fact, even juices are considered harmful owing to their high sugar content. Consumers are now preferring natural and healthy drinks to meet their beverage requirements. Thus, with growth of sports and energy drinks, RTD tea and bottled water, Pepsi is in a good position to increase its top line.

Sports and energy drinks is the fastest growing segment of Russia’s beverage market. Its volumes rose by 24% in 2011 and by 17% in 2012 year-on-year to reach ~140 million liters. [4] As this category is still relatively nascent, it is expected to grow at a CAGR of 8% and reach over 208 million liters by 2017.

This market is presently led by PepsiCo with a share of 30%, followed by Coca-Cola and Red Bull, which have a share of 17% and 14% respectively. PepsiCo’s brand Adrenaline Rush is the best selling energy drink in the country, with a market share of 36.2%. [5] However, the company’s dominance in this segment could be challenged by Coca-Cola’s Burn, which was launched in 2011 and is gaining popularity. The local beer brewing company Baltic also launched “Flash Up”, to compete in this category.

As of December 2011, the RTD tea market constituted around 6% of Russia’s beverage market in terms of volumes. [6] PepsiCo again leads this segment with an impressive market share of 47%. The company’s brand Lipton Iced Tea is the best selling RTD tea in the country, but is rivaled by Nestle’s Nestea. [7] In a bid to attract more consumers and eat into Nestle’s market share, PepsiCo launched Lipton Nature Green in 2011, which claims to contain natural green tea leaves. Owing to the healthier perception of tea, especially green tea, the RTD tea market is expected to grow at a CAGR of 5% in the next five years.

In the bottled water market, both PepsiCo and Coca-Cola share the top position with a market share of 8% each. [8] However, PepsiCo’s Aqua Minerale is the market leader along with its flavored version Aqua Minerale Active, beating Coca-Cola’s BonAqua.

The bottled water segment is presently worth ~$3 billion. Given the rising concerns over safety of tap water, low consumption rate of bottled water (~33 liters per capita) and increasing disposable incomes, this segment presents potential growth opportunities. [9] However, PepsiCo and Coca-Cola face the threat of local manufacturers such as “Karachinsky Istochnik”, which are particularly active in the periphery of Russia. Thus, both these companies will look to strengthen their distribution channels and possibly acquire smaller bottling plants, in order to establish a stronghold in this market.

According to our estimates, PepsiCo generates over $3.5 billion in annual revenues from beverages in Russia. Thus, the company constitutes a fourth of this $13.8 billion market. Even if we assume no change in market share, PepsiCo could reach annual revenues of ~$4.2 billion by 2017, as Russia’s beverage market is expected to grow by 3.5% annually.

“Juice market in Russia“, Russia Beyond The Headlines [?]