4 Fascinating Facts on the Social Media Landscape in Russia 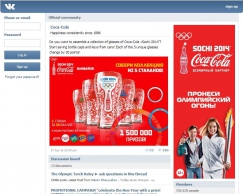 Russians are adopting social media at a more rapid rate than most other countries around the world. For global brands, there are tremendous opportunities in tapping into this newly hypersocial culture.

Russia is embracing social media at lightning speed. They are adopting social media at a more rapid rate than most other countries around the world. For global brands looking to expand their social media presence to Russia, there are now, more than ever, tremendous opportunities in tapping into this newly hypersocial culture .

Russians Are More Active On Social Media Than Any Other Country

There are only 20% of active social media users within its population, but the Russians who are connected to the internet spend more time on social networks than in any other country in the world – especially on their own local sites.

Although Russians are active on Facebook and Twitter, the world-known sites from the West take a backseat to the more popular local Russian sites – VKontakte.ru, and Odnoklassniki. The largest social network in Russia, VKontakte, is very similar to facebook, and it’s become extremely popular on account of its integrated file sharing which allows users to post music and videos directly onto the site. It actually rivals YouTube as the most popular video hosting platform in Russia. Odnoklassniki is the the second largest social media site in Russia, designed for reconnecting with old classmates and friends.

Russia is Ranked #14 in the World for Twitter Usage

Although it’s not as popular as their own local sites, the growth of Twitter in Russia has been astonishing. Russia is #14 in the world in terms of Twitter usage, with approximately 60% of Russians updating their profile daily.

The number of social media users in Russia is growing at a very fast pace, mostly on their own local sites Vkontakte and Odnoklassniki – emarketer predicts 45% of the population will be active on social media by 2014.

It’s safe to say Russians have become a hypersocial culture, and have truly embraced social media – but for brands, listening and engagement practices are still at their early stages. Most companies have only started to listen less than a year ago. However, the country has some strong innovators and web entrepreneurship is booming – we can certainly expect large global brands and innovative small businesses to launch social media initiatives that will set an example to others.

Innovative, forward-thinking brands like Sberbank have started to lead the way in social media thought leadership in Russia, providing other brands with excellent examples of social media best practices and strategies. As part of its rebranding process, Sberbank created a team  to monitor the social space and solve issues. The team used social listening to identify complaints, understand the problem and resolve it by liaising with local offices. Sberbank currently has over 90,000 followers on Vkontakte.