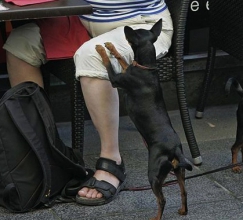 The state-of-the-art robotized production line, located in the Vorsino techno park near the border between the Kaluga and Moscow regions, took under two years to complete. It will use 90 percent locally made ingredients and packaging and will produce cat food under the brand name Felix.

This is the third production line of Nestle’s pet-food factory, which started in 2007. Today, 385 people are employed at the plant in Vorsino.

Next to the pet food production facilities, Nestle is constructing a 27,000 square meter distribution center costing over 1 billion rubles ($32 million). The facility is to start operations in October.

“The economy in Russia may not be in a very good shape, but the pet food market has great dynamics,” said Fyodor Borisov, managing director of the Pet Food Manufacturers Association.

He estimates that the market is growing about 10 percent per year and one of the biggest in the world, with the number of cat and dog owners here being larger than in all of Europe.

Nestle Purina Europe PetCare CEO, Marco Settembri, estimates that there are around 20 million to 25 million dogs with owners and about 15 million cats in the same privileged category in Russia, for a total market of 35 million to 40 million potential furry consumers.

Nestle executives said pet food producers were battling for owners’ affections, since less than half of those who kept pets in Russia gave their animals commercially produced food, while the rest still fed their pets scraps from the table. By comparison, in the United Kingdom, 90 percent of pet food is factory-made.

“The potential of the Russian market is extremely huge. To me, you can double it just because of that,” Settembri said.

“More and more people here are turning to industrial pet food, which will give animals the right vitamins and minerals and will help them live better and longer,” said Settembri, who owns an 11-year old Golden Retriever.

“Also, the fact is that people have less time to prepare food themselves, and so ready-made products are more convenient,” he added.

For Nestle Purina, the current market focus is mostly on cats, which seem to buck their reputation and are more loyal, at least to food makers, than dogs. “If you start giving a cat a good product like Felix, it is then very difficult to give him something else afterwards; he will refuse to eat it. With dogs, a change of diet is easier,” Settembri said.