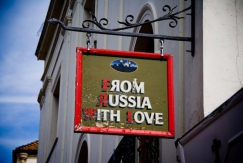 From Russia with Love

The Russian government is planning to launch its own search engine named after the first man-made satellite Sputnik.

Move the heck over Yandex and Google, the Russian government is allegedly planning to launch its own search engine named after the first man-made satellite Sputnik.

The news was first reported by Russian newspaper Vedomosti. The Sputnik search engine is apparently being back by both the Russian government and state controlled telecom company Rostelecom, which reportedly dropped over $20 million on the new project. Rostelecom is apparently trying to poach engineers and other employees away from its rivals as well as other search engine companies, according to the report.

If true, the Sputnik search engine — which admittedly sounds like the title for a forth Austin Powers movie — may also become the default search tool for all government facilities and state-backed organizations within the country. Some have indicated that this is yet another attempt by Russia’s leadership to install tighter control over the entire internet, but there a good chance this plan won’t get very far if no one actually uses Sputnik.

As Reuters points out, the Russian search engine market is currently dominated by two major players that likely aren’t going to budge due to new kid on the block Sputnik. The biggest search engine in Russia is actually Yandex with roughly 60 percent of all search activity, followed by Google and Russian tech firm Mail.ru. And even if there was potential for another major search engine, Sputnik still has the disadvantage of being developed by a telecom company that has zero prior experience building such a service. (For perspective, imagine what a train wreck it would be if AT&T suddenly decided to launch a search engine to compete with Google.)

Vedomosti’s report indicates that Sputnik search engine is expected to launch by next year.