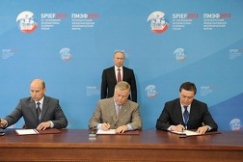 Vladimir Yakunin, President of the Russian Railways company, Vladimir Mikhaylyuk, Deputy Chief of the Belarusian Railway, and Askar Mamin, President of Kazakhstan Temir Zholy, have signed a plan for the establishment of the Transportation and Logistics Company, ITAR-TASS reports.

The new company is set for launch in Q1 2014. A framework agreement to found the company was signed at a meeting of Russian, Kazakh and Belarusian leaders at the St. Petersburg International Economic Forum in June 2013. It was followed by an agreement on basic principles of the company signed in October. The three railway authorities, TransContainer and RZD-Logistica headed by Zhanar Rymzhanova, Advisor of the president of the Russian Railways, will form the company.

The three states will adopt a common transportation fee for China-Europe-China container transportation as a response to interests of the Chongqing Province (China).

The project will benefit shareholders and countries of the Single Economic Space. Cargo transportation of the Transportation and Logistics Company will exceed 4 million TEU by 2020. National railways will get additional income of about $1.6 billion by 2020. The cumulative contribution to the GDP of Russia will total about $5 billion, Kazakhstan $5.3 billion, Belarus about $1 billion.