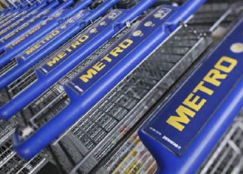 "We are currently reviewing additional funding source options for a step-up in expansion. One of these possible options could be the stock listing of a minority share in METRO Cash & Carry Russia, thereby retaining control of the business in the long term," the company said in a statement.

It said that its Russian Cash & Carry business was "one of the largest growth drivers in the group" with more than 4.0 billion euros ($5.4 billion) in annual sales and over 70 stores.

"In the future, we intend to further tap into the still strong Russian market growth potential from the already strong market position of our Russian wholesale subsidiary," the statement said.

However, "no formal decisions have been passed", it insisted.