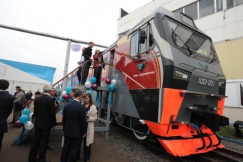 "Our locomotives are 70 to 80 percent worn out, and depreciation payments are soaring. This is why we need new machines," said Russian Railways senior vice president Vadim Morozov.

Siemens and its Russian manufacturing partner, Sinara, presented a new freight locomotive on Wednesday at the 1520 International Railway Exhibition on the territory of the Russian Railway Research Institute in Shcherbinka near Moscow.

The locomotive, currently known as Project 11201, will be produced by Ural Locomotives, a joint venture of the two companies.

Although suitable for use across all countries that have 1520 millimeter gauge railroads, the 11201 is mostly intended as a replacement for the old rolling stock of Russian Railways, given that their investment program stays at the current level of spending.

If the government's plans to freeze natural monopoly prices for next year were implemented, Russian Railways would lose about 77 billion rubles ($2.3 billion), a source in the top management of the company told Interfax on Wednesday. Also, the company's investment program, which was planned for next year at 360 billion rubles, could be cut by as much as a third, the source said, the agency reported.

At the same time, Russian Railways badly needs new rolling stock as keeping the existing one running is costly.

"Our locomotives are 70 to 80 percent worn out, and depreciation payments are soaring. This is why we need new machines," said Russian Railways senior vice president Vadim Morozov.

He said the company intended to buy about 800 locomotives of all types this year, but did not disclose how many of them would be of the 11201 type.

Morozov also said the exhibit was a good place to present competitive models.

One of them was the 2ES5 electric freight locomotive, showcased by Alstom Transport and its Russian partner, Transmashholding (TMH).

It was designed by TRTrans, a joint TMH and Alstom engineering center, and is produced at a factory in Novocherkassk in the Rostov region.

Speaking about possible competition on the locomotive market between the Alstom-TMH partnership and their rivals, Siemens-Sinara, Alstom Transport president Henri Poupart-Lafarge said the two electric freight locomotives do not have the same technical parameters.

"But how much of each type will be ordered is for the customer to decide," he said.

Siemens and its rival Alstom, together with their Russian partners, also compete on the high-speed train market, for which the country has extensive plans.

That latest plan declared by top government officials was to build a high-speed railroad from Moscow to Kazan, which would require new trains.

Both Alstom and Siemens are ready to supply their products for the project, but Russian Railways president Vladimir Yakunin said earlier that the company would opt for the manufacturer who came close to full localization of its production within the country.

In an earlier interview with The Moscow Times, Dietrich Moeller, Siemens president for Russia and Central Asia, said the company was prepared to have 80 percent of its Lastochka regional trains localized in Russia by 2017.

"We already have 100 percent localization of our locomotive production in the country, what can stop us from doing the same with high-speed trains?"