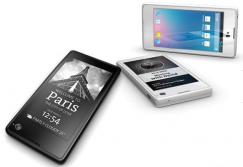 Russian made YotaPhone will reach 20 markets in Russia, Europe and Middle East by early 2014… Use the LCD side to watch videos and play games, then flip the phone over to read a book or magazine on the e-ink display.

The Android-based YotaPhone is now available online in Russia, Austria, France, Spain, and Germany for about $600-$700; it will reach a total of 20 markets in Russia, Europe, and the Middle East by early 2014, but the possibility of a U.S. release has not yet been announced.

The 4.3-inch smartphone sports a full-color 720-by-1,280 LCD screen on one side and an electronic paper display (EPD) on the other, allowing for various functions on one handset. Use the LCD side to watch videos and play games, then flip the phone over to read a book or magazine on the e-ink display.

"The typical user picks up and activates their smartphone more than 150 times a day," CEO Vlad Martynov said in a statement. "Why? Because users worry that messages or information they need or want are hidden behind their phone's black screen. This is a huge distraction and can impede meaningful interaction with our friends, families, and colleagues."

"Information … stays on the always-on screen until it is no longer needed," Martynov said.

The dual-screen phone runs a 1.7GHz dual-core processor and Android Jelly Bean 4.2.2, with 2GB of RAM. There is also a 13-megapixel camera located on the EPD side of the phone. YotaPhone's unique "always-on" technology helps to preserve the phone's 1800mAh battery power; in reading mode, the device has up to 10 times the lasting power of other smartphones.

"Once we determined that an electronic paper display would work as a second screen, an array of new and improved user experiences became obvious," Martynov said.

Yota Devices has been working on this new handset for more than three years; the first model was shown in September 2010 to then-Russian President Dmitry Medvedev.

"YotaPhone isn't just a new phone, it's a new way for people to communicate and use information," Martynov said. "We are a start-up company that had a big idea and we've executed on that idea. This is YotaPhone 1.0. Expect other big and new things to follow."

For more, see PCMag's Hands On With the YotaPhone at CES 2013 and the slideshow above.