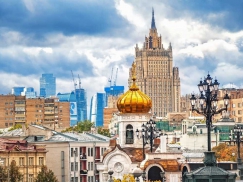 The Kremlin is mulling the creation of a "doing business" rating of Russian regions that would assess the obstacles to private enterprise, an aide to President Vladimir Putin said.

The rating could be introduced after 2015, in place of the government's current detailed instructions for reducing bureaucratic barriers to business, dubbed road maps, Putin's economic aide, Andrei Belousov, told Vedomosti.

In addition, the rating could assess the efficiency of infrastructure, said an undisclosed source at the Agency for Strategic Initiatives, a government-linked think tank.

The regional rankings could be based upon the World Bank's annual Doing Business rating. Russia improved its showing on that scale in 2013, rising to 92nd place from 111th place last year.