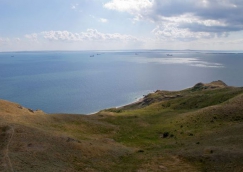 Russia to build a new cargo port on the Black Sea

As officials scowl at the cargo that goes out through foreign harbors, the government is making headway on a plan to build a $7 billion port on the Black Sea.

The Port of Taman will open in 2019 to handle dry cargoes, such as grain and coal, Transportation Minister Maxim Sokolov said Tuesday.

Sokolov updated President Vladimir Putin on the work to build the port in the first of a series of port-related meetings with the head of state, the Kremlin said.

Putin said he initiated the meetings because of high congestion at most of the country's key ports, which hamstrings foreign trade, he said.

"The terminals are now strained to the limit," Putin said.

A substantial chunk of the cargoes travels through the ports in the Baltic countries like Latvia and Estonia.

"It's a downright loss of revenues for Russia," Putin said.

Out of 660 million metric tons of Russian exports, the foreign Baltic ports account for 100 million tons, or 15 percent. Sokolov said Russia was moving to scale down its dependence on the Baltic countries.

A consortium of Russian and Dutch design companies developed a concept for the Port of Taman last year, Sokolov said. The Main State Evaluation Agency is examining its feasibility, he said.

Taman is Russia's most expensive port project on the Black Sea, according to Sokolov. Federal spending will amount to 76 billion rubles ($2.3 billion), while private investors are expected to contribute the remaining 152 billion rubles, he said.

When the port reaches its full capacity in 2025, it will handle 94 million metric tons of dry cargo per year, Sokolov said.

The Port of South Louisiana, the largest U.S. harbor by the volume of cargo, handled 222 million metric tons of cargo in 2011.

Private investors have bid to build 20 percent more terminals than the Port of Taman can accommodate, which enables the government to select the best options, Sokolov said. The port is designed to have 10 terminals for shipping steel, containers and other dry cargoes in addition to coal and grain.

The government also plans to boost capacity at the Novorossiisk Seaport, the largest Russian sea gateway, Sokolov said. The effort will focus on constructing new terminals for containers and bulk cargoes, as well as an upgrade of the equipment at the existing terminals and expanding roads and railways for better access to the ships.

In a separate plan, the government allowed a private investor to build a smaller port near the Port of Taman to handle coal, primarily from Kazakhstan, and oil. The 45 billion ruble oil terminal has already been completed, Sokolov said without naming the investor.

Russian Railways Company chief Vladimir Yakunin said at the meeting that the state-owned company would expand its network in the area in a bid to remove bottlenecks for the anticipated increase in the volume of cargoes.